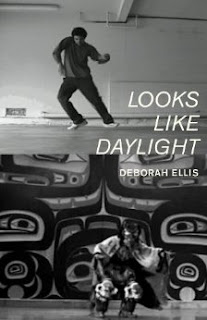 Looks Like Daylight: Voices of Indigenous Kids (CAN, JP, US, INT)

Deborah Ellis, the Governor General’s Award winning author, has once again delved into the lives of young people to showcase their true stories. Her nonfiction and fiction books on the children of Afghanistan, Iraq, and other war-torn countries have shed light on fascinating regions and the resilient children who reside in them. Ellis brings her signature story-telling style to the indigenous children of North America in her latest offering.

The biggest thread that pulls these stories together is diversity! Ellis introduces kids from the Arctic and those from the Choctaw nation, 9 year olds and 18 year olds, and both urban kids and those who live on rural reserves. These kids deal with the regular pressures you'd expect for teens, from peer pressure to finding themselves and wondering about their futures. But some have more than they should, from hunger and poverty to family violence, and awful treatment from teachers and other adults.

The kids in the foster system have a variety of experiences, some okay, and some awful. But there are more indigenous kids in the foster care system than there should be, for various reasons. There are some major issues with that, and one of them is that kids don't always survive a system which is supposed to support them. Four kids in the Alberta foster system died in the first half of 2011.  Something needs to be done.

On the other end of the spectrum, when kids are treated well by adults, is inspiring. Tingo's story tells about doing genograms, family histories to look for secrets that shouldn't be kept. Tingo and his friends wrote their problems down, burnt them, and offered them up to the Creator. By telling so many kids' stories, I think Ellis is having the same healing effect as Tingo's activity did.

The second theme that threads through these stories is the strength of these kids. It gives me great hope for their futures and the future of North America with these kids speaking out and speaking up. Looks Like Daylight is about hope, and it is an amazingly inspiring book. She treats all of the kids in her book with a great deal of respect, and this makes fascinating reading.

This post is for Nonfiction Monday, hosted this week by Resh at Stacking Books.