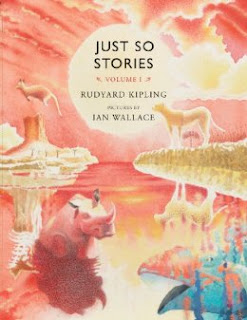 
Just So Stories are some of Rudyard Kipling's most famous works. This group of six stories of myths about large animals have been retold many times since they were first published together over 110 years ago.

The reason Kipling's stories are so beloved is because of their respect for the animals and his amazing storytelling. His poems and prose alike are filled with delightful turns of phrase. Such as this Sloka in "How the Whale got its Throat":

By means of a grating/I have stopped your ating.

The words are old-fashioned but so easy to read aloud! Kipling brings the rhythm of poetry to the rest of his stories.

Ian Wallace is know as a very successful illustrator, and one of the reasons why is that he has such a diverse style. This diversity plays out in this group of short stories as Wallace uses different colour themes to differentiate the illustrations for each story. The other reason Wallace is so beloved is his cultural sensitivity, whether to aboriginal peoples or to people of the Far East, Wallace brings in his abundant knowledge to his artwork and portrays all types of people with respect. This especially works for How the Leopard Got His Spots, which could be considered controversial.

These stories will broaden your vocabulary and entertain, and animal lovers of all ages will enjoy Kipling's animal myths paired with Wallace's beautiful illustrations.
Posted by Perogyo on Sunday, October 06, 2013