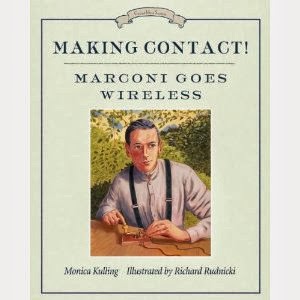 
The newest book in Monica Kulling's Great Idea Series is just as much of a winner as the others we love, like Going Up! Elisha Otis's Trip to the Top.

This time we are introduced to Italian inventor Giglielmo Marconi. When Marconi was young, like Einstein, he didn't do well at school. But he was a prolific reader and learner, even going so far as to find a telegraph operator to teach him Morse code.

He worked for many years on his idea to send wireless messages on radio waves- leading to the invention of what we know as radio. Just sending it across the room wasn't enough, he journeyed across the world to St. John's Newfoundland to make sure radio waves could make it around the world. He battled fierce winds but never gave up no matter what Mother Nature had in store for him.

Without Marconi's invention we wouldn't have radio, tv, or even cell phones. We owe him a debt of gratitude. I got to hear my mother's voice from across the world this Thanksgiving weekend, thanks in part to Marconi not giving up on his idea.