The Man With the Violin 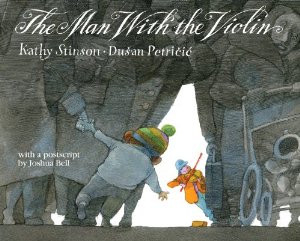 
Provided by the publisher for review through NetGalley. All opinions are my own.


Kathy Stinson is very popular in our house. When my daughter was 2, she dragged Stinson's Red is Best around until it was so ragged it had tape on almost every page. I was thrilled to find out she wrote a book about violin virtuoso Joshua Bell and his 2007 subway station experiment.

On a cold day that January, one of the most talented musicians of our time sat in a busy Washington, DC station and played for harried commuters during the morning rush hour. These people, intent on getting to their destinations, hardly seemed to notice the great gift they were being given.

Stinson takes Bell's experience and weaves a story of what a little boy could have felt that day. Little Dylan is someone who notices things when those around him simply do not. Smells wafting and music drifting are enough to get his attention. He is lucky enough to realize the gift Joshua Bell was giving them. His mother learns that sometimes it's important to stop and smell the roses or at least listen to them!

Dušan Petričić (Mattland) is what takes this from a simply moving story to a really classic picture book. This book is only 2D and there is no music pumped from it, but you can see the music in
Petriči's artwork. It looks like a magic spell wafting through the air and only affecting certain people with an open heart.  His use of contrast between colour and black and white to indicate who is paying attention, and it is extremely effective.

The beautiful message in this book about enjoying every moment is delivered with an amazing story and affecting illustrations.


This is the fourteenth book I have reviewed for the Seventh Canadian Book Challenge.