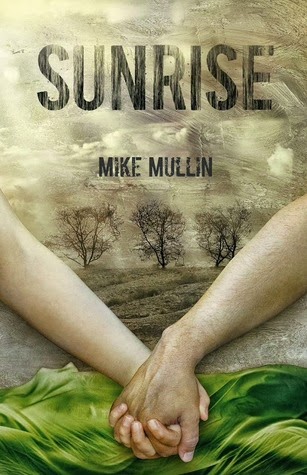 Written by: Mike Mullin
Published by: Tanglewood Press
Published on: April 15, 2014
Ages: Young Adult
Provided by the publisher through NetGalley. All opinions are my own.

The third, concluding book in the apocalyptic Ashfall series is Sunrise. The title is happier than either of the first two books, Ashfall and Ashen Winter. It alludes to hope, the theme of this book.

Mullin is a master at writing action scenes. There are plenty of those in this book, but also a lot of interaction between the characters we have grown to love in the trilogy. It's the perfect mesh.

In other post-apocalyptic books, we usually get a government gone wrong and people pushing back against them (ala Hunger Games). But I am always most interested in how people get that government. What are the choices that lead them that way?

Alex and Darla have experienced the government's hospitality after the Yellowstone super volcano blew, as well as that of the government's subcontractors. They realize that they are on their own- and they make steps toward being self-sufficient. Alex is able to lead while still being true to Darla and his own young self.

Sunrise is my favourite in this trilogy, which is saying a lot as I really enjoyed Ashfall. The only bad thing is saying goodbye to a trio of books I have enjoyed so much.
Posted by Perogyo on Tuesday, April 15, 2014