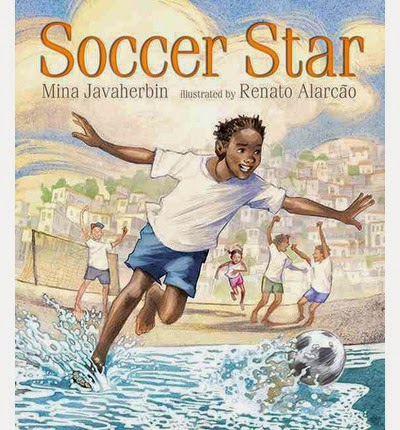 
It's June and that means World Cup month! The most popular event in the world starts in two short weeks. If your house is anything like mine, World Cup mania has already started and conversations about Japan's hope for the Cup and whether Luis Suarez will actually be healed from his knee injury before Uruguay's first game are dinner table topics. Or maybe not!

Soccer Star is the perfect book for a kid who is interested in soccer or geography, or someone who loves a feel-good sports story about hard work and dedication.

Paulo is the protagonist of this story, and this Brazilian boy loves soccer so much he thinks about it during his job on a fishing boat. The realities of life for most Brazilians are not glossed over here, as all the boys on his team work instead of go to school so they can just eke out a living. Paulo learns from his sister Maria who still goes to school.

Despite his harsh reality, Paulo dreams big. He dreams of being a huge soccer star, big enough to be known as just one name ala Pele! Then he can support his hard-working mother and sister, and play soccer on beautiful pitches for a living.

Javaherbin is also the author of Goal! which was in the same vein as this book, released at the time of the 2010 World Cup in South Africa. Her rhythmic text captures the imagination of readers while adding in the realities of life in the host countries and a message of never giving up hope are inspirational to young readers, soccer players and non-players alike. Soccer Star and Goal both inspired social studies units in our after schooling regimen and they were very well received. It's hard to say enough good things about these books.
Posted by Perogyo on Sunday, June 01, 2014

Email ThisBlogThis!Share to TwitterShare to FacebookShare to Pinterest
Labels: ages 5+, best of the year, Brazil, soccer