This Is Your Brain on Stereotypes: How Science Is Tackling Unconscious Bias 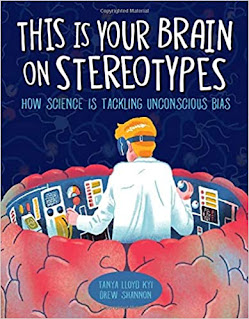 This Is Your Brain on Stereotypes: How Science Is Tackling Unconscious Bias

A copy of this book was provided by the publisher through NetGalley in exchange for an honest review.

This is an absolute must-read for middle grade readers and should be for adults as well. The author gives evidence-based reasoning for why stereotypes happen, how they happen even if we don’t want them to happen, what the consequences are, and even how to overcome them.My kids found the entire book fascinating- great illustrations and really compelling writing. We’ve had a number of conversations about the subjects that it brought up. One of the most fascinating parts is how people know tosay that they aren’t bigots, but those words don’t always show themselves in actions, such as in the “ Ralph's Garage” experiment presented by Kyi. Callers were less likely to help someone whom they perceived to be Black over thephone. Measuring actual bigotry in this manner is going to be more accurate than just asking someone if they have bigoted thoughts.Kyi’s book introduced my kids and I to “stereotype threat.” This is when people feel that they may be conforming to stereotypes of their group or a group they are perceived to be members of. It was easy for me to point outbehaviours of my son, who is perceived as a minority in Japan, that may stem from stereotype threat from children and adults with whom he interacts. But what is amazing is that my kids were able to point out some of my behavioursthat may be related to stereotype threat. As a very visible foreign resident of Japan, I am aware that there are more eyes on me than on my Japanese neighbours, and I try very hard not to live up to bad stereotypes. My kids told me I am much stricter about trash division than any of their Japanese friends’ moms, because I have had the unenviable experience of being blamed for someone else’s trash going out on the wrong day or the wrong bin.These stereotypes, however, have much more serious consequences than neighbours leaving a bag of unwashed fish cans on a doorstep. They lead to systemic racism, eugenics, and even genocide. Kyi makes us understand thewhy and how of stereotypes, but also leaves us with some ways to improve things, and examples of people who have spoken up.This book would make an excellent addition to any curriculum, and I hope it is used widely in schools and the community. It’s the book we need, and I wish I’d had when I was in junior high.